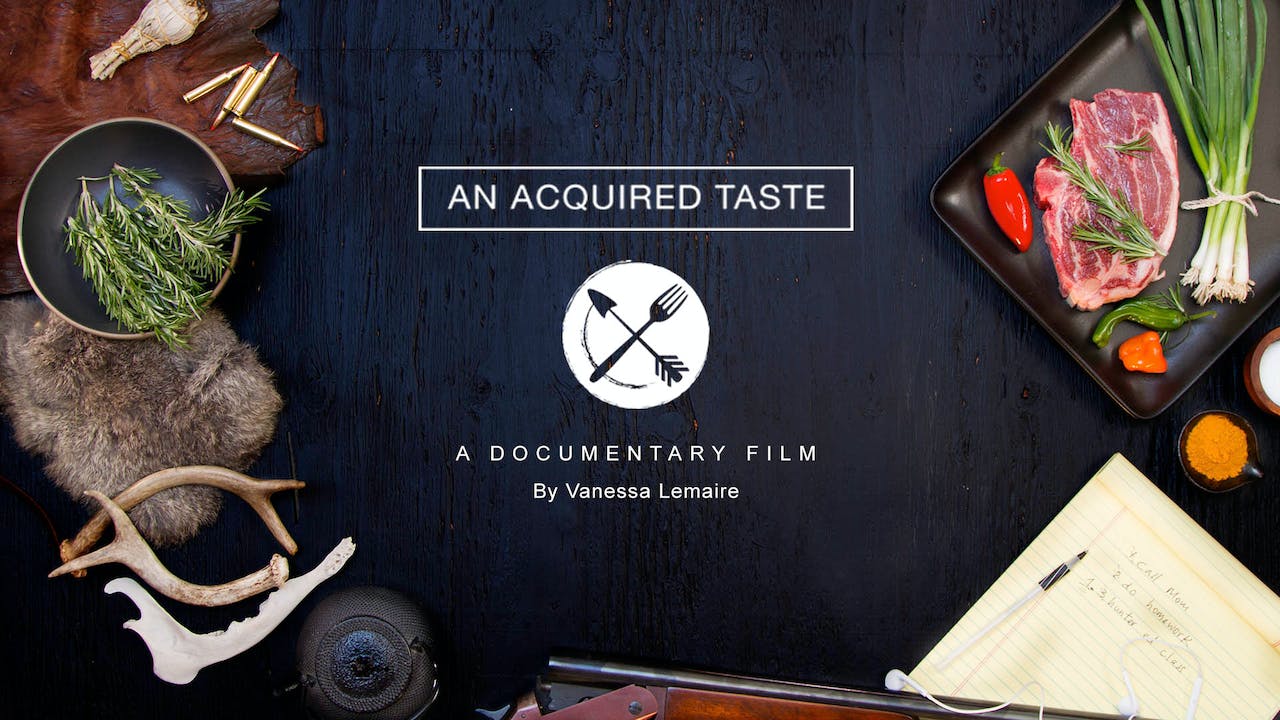 An Acquired Taste is an award-winning documentary following three urban teens from non-hunting families, who unplug, and show their parents what it means to responsibly put food on the table. You’ll meet Ashlie, age 13, the animal-lover who believes hunting is more humane than factory farming, and Nick, a fatherless twelve-year old who follows his mentor’s footsteps for the ultimate protein.

"No matter how you feel about hunting or even about eating meat, you cannot help but rejoice" Documentary review by Mark Taylor, KQED TV

“This film has a character richness you don’t typically associate with documentaries. Bon Appétit.” Chuck Jaffee: ‘An Acquired Taste’ worth a bite, THE UNION

"Vanessa LeMaire’s feature debut is a profound reflection on what makes us human."
An Acquired Taste, by Scott Staats, PORTLAND TRIBUNE

In this film, a rural kid and a suburbanite could sit side by side and understand each other a little better"Film documents a responsible young consumer approach to hunting.” - Gary Lewis, Outdoor Writer, The Bulletin

Motivations for hunting are changing, and the film “An Acquired Taste” artistically captures this as it follows three young teens from non-hunting families as they learn how to hunt. This film will help those working to expand participation in hunting understand the complex journey that people without a hunting background must navigate to become hunters. – Chris Willard Deputy Administrator Oregon Fish and Wildlife Information & Education Division

This film beautifully captures the motivations, excitement and emotion of hunting but the subjects aren’t your everyday hunters—they are young people from different backgrounds who didn’t come from the traditional hunting culture. That makes it an important film for lifelong hunters like me and anyone
interested in reaching new people and continuing our hunting heritage. – Curt Melcher, Director, Oregon
Fish and Wildlife

“You captured every emotion that a hunter can feel, from fear, to skepticism, to nausea, to elation and then back again. And the youth actors were so genuine, nothing staged. I look forward to sharing this film
as I know many of my neighbors are considering hunting and they would be a great audience.” Gary Berlin, Retired wildlife manager Colorado Division of Wildlife and former Executive Director, IHEA.

"This film has a character richness you don’t typically associate with documentaries. Bon Appétit."; - Chuck Jaffee, The Union
"I love how conservation is approached with consideration for sustainable use, that the film focuses on younger urban adolescents, and how responsible all the individuals were with their approach to hunting, gun safety and recreation." - American Conservation Film Festival Jury Member

An Acquired Taste is a unique, unprecedented film that supplies nonprofits, businesses, government agencies, and community organizations an easy-to-use resource to lead positive common-ground seeking discussions around hunting with audiences from all perspectives, non-hunter and hunter communities, preservationists and conservationists, vegans and meat eaters.